Journeying Through Grief at Camp

Over the past five years, I have been fortunate enough to be able to act as Camp Director for Southeast Wisconsin’s Annual Children’s Bereavement Camp. This bereavement camp experience is offered to children ages 6-17 who have suffered a death in their family, and is made available free of charge to the community by the generous support of donors through the Seasons Hospice Foundation. These camps are staffed by clinicians and volunteers that, as a team, have been able to serve over 200 bereaved children since the first camp back in October 2014. Each camper is supported to find a way to share and express their own unique and personal grief story, but within the individuality of the stories, the theme of resilience consistently emerges. 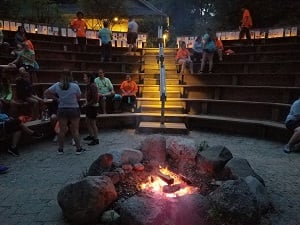 It’s at this time of year, when the cold and dark of winter begin to fade and we look towards the warmth of spring, that we often think of concepts synonymous with spring, such as renewal, growth and rebirth. Much like the changing of the seasons, the courage that the children exhibit at bereavement camp can offer an important reminder of strength as well. Encouraging and creating space for campers to learn that they are even more resourceful and powerful then they themselves realized is captured well through the story of a camper named Anthony.

When I met Anthony, he was a 13 year-old whose mother died from ovarian cancer when she was in her 30’s. Like many of the other campers, Anthony was dealing not only with his feelings related to the death itself, but with the many life changes that were associated with the death of his mother. For Anthony, it meant that he became a part of Children’s Protective Services (CPS) in Milwaukee County and he was placed to live with his maternal grandmother who became his legal guardian. With all the sudden changes, Anthony found it difficult to express his feelings and to manage his anger. Feeling ill-equipped to meet his needs at that time, Anthony’s grandmother reached out to CPS for their support, and asked them to find an out-of-home placement for him. At the time of camp, Anthony was residing in a group home in the inner city of Milwaukee.

When Anthony was told about Camp Kangaroo by his caseworker, he was drawn to it for many reasons: an exciting weekend out of the city, being with other children his age who have also experienced the death of a loved one, and a chance to “release his story.” He disclosed that before the camp, he was worried about sharing his “story or feelings” because he was afraid that it would result in a negative response. For Anthony, the first step in his journey was making the decision—all on his own—to pick up the phone and call our Volunteer Coordinator to inquire about camp. After the phone call, Anthony said, “Sign me up.” He stated that the decision to make this phone call was about taking advantage of an opportunity, and he believed that the camp experience could change how he had been coping with the death of his mother and, thus, take a step closer to moving back home with his family.

When Anthony arrived at camp, he felt an overwhelming feeling of acceptance, safety, and even humor. After camp ended, he revealed that he enjoyed the group sessions the most, as it helped him to hear about the stories and feelings shared by his peers. Anthony was comforted in learning that others, too, had been struggling with managing their emotions and also felt angry following the death of their loved ones. 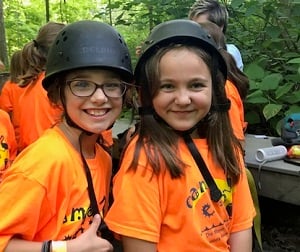 Although he referred himself to the camp, this did not mean that Anthony was the first to participate in the activities designed to help the campers share their feelings. Having the support and acceptance of the counselors and his peers is what gave him the courage to participate in the sessions as time went on. When asked about which camp activities had made a strong impact on him, he identified two exercises in particular. In one of the group sessions, the counselors encouraged campers to release their anger by popping an inflated balloon. During this exercise Anthony stated, “I am angry that my Mom will not be present at my graduation,” and then he popped his balloon. This was the first time that he had ever said these words out loud, and he felt so much relief from this experience. The second therapeutic intervention that moved Anthony was the large drumming circle activity. It was more difficult for him to put into words how this experience touched him, but the smile on his face showed that it was another important step in his journey.

By the time camp was coming to a close, Anthony had begun to develop personal goals, including being able to utilize what he learned at camp to “make sure my feelings don’t come out in a bad way.” He wanted to continue to become more comfortable in sharing his feelings and experience, so that he could help other children the same way camp staff and volunteers had helped him. Anthony understood that while he had accomplished a tremendous amount at camp, his work and grief journey was not over.

Each year as spring arrives and we start the preparation for camp, I think of Anthony and am optimistic that he was able to continue the progression towards his goals. Grief is not something that we ever conquer, defeat or forget, but what can happen, as Anthony demonstrates well, is growth.

Kevin Gahagan is Director of Supportive Care at our Wisconsin site. To learn more about attending or supporting our children’s bereavement camps, please click here.