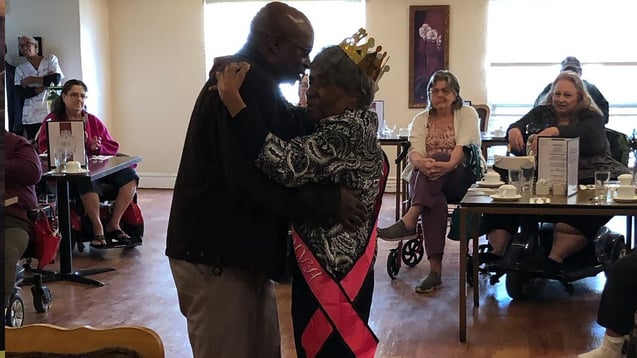 If you’re about to celebrate your 106th birthday, there probably aren’t too many things left on your wish list. For our patient Ms. Hilda, however, there was one thing that she very much still wanted – and that was to be on tv! Ms. Hilda lives at Immanuel Campus of Care in Arizona, and we joined together with them to throw a party to celebrate her birthday. Of course we had to make Hilda’s wish come true!

Ms. Hilda was born in Dallas, Texas in 1913. There was one thing that Hilda was interested in from the very beginning – and that w 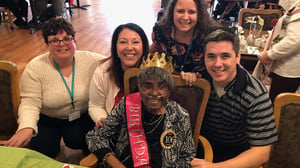 as dress making! From the age of 12, she started making alterations and sewing clothes for the people in her life, and before long she had her own little business! Hilda’s mother died when she was only 4 from a flu epidemic, and her father died in World War II, so Hilda was raised by her grandmother. She spent most of her life supporting herself; while she got married young, she chose to leave her abusive marriage when her son was only 5. When her son was 13, they packed up and moved to New York so he could go to a vocational school.

Ms. Hilda quickly put her dress-making skills to work in New York, and started work in the alterations department at the illustrious Saks Fifth Avenue in downtown New York. She also took up singing – she had a beautiful voice, and would travel all over because she was asked to do performances.

When we asked Ms. Hilda what she considered to be her greatest accomplishment, she said that despite living through the difficulties of segregation and the struggles that brought on the Civil Rights movement, her faith was what changed her heart from hurt and hate to peace and love, and has led her to show kindness to everyone ever since.

On the day of her birthday celebration, there was cake, sparkling grape juice, and, last but not least, a surprise appearance by a camera crew from a local news station. Ms. Hilda was delighted—her life-long wish to be on tv was finally granted!

When Ms. Hilda was asked what stood out to her most about the last 106 years, she was quick to answer: “To see a black man as president of the United States. That stood out to me. I think of that often, which I never thought it would happen.” What makes this even more special is that on her 100th birthday, then-president Obama sent her a birthday greeting!

Happy birthday, Ms. Hilda! We are so thankful we were able to be part of your birthday celebration and to make your birthday wish come true!

Community, Patient Stories
Bringing Your Skills to Seasons Journeying Through Grief at Camp