Bringing Your Skills to Seasons

The Benefits of Culturally Diverse Volunteers

The city of San Jose is rich in cultural history. Compared with other large metropolitan areas in the U.S., San Jose has been identified as the most diverse. Over 33% of citizens are Hispanic, and 32% are Asian. More than 83 languages are spoken. As an official “Sanctuary City,” San Jose hosts 724,000 immigrants and a high-tech workforce with 75% of its workers brought from other countries. Here, in sunny San Jose, there IS no ethnic majority.

To best serve this community, Seasons San Jose knew they needed a diverse group of volunteers. The staff set a goal to recruit volunteers who represent a span of nations and would match the diversity of the patients we serve. Seasons San Jose has succeeded in cultivating a team of volunteers who speak eleven languages—Albanian, Finish, French, Hindi, Italian, Kannada, Tamil, Mandarin, Marathi, Spanish, Telugu, and Vietnamese.

Our team receives frequent requests from families that would like a volunteer who can speak their language. “After dementia has taken its toll, patients sometimes return to speaking their native language,” says Alex B., Seasons San Jose-based social worker. “Providing a volunteer who speaks the same language helps the patient and family feel uniquely cared for.” 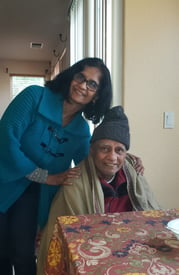 Volunteers who share ethnic backgrounds with patients can also share familiar traditions, holidays, and memories. One such volunteer has been faithfully serving the San Jose Seasons office for over a year. Indira I. was born in Mumbai, the capital city of the Indian state of Maharashta, and now lives in San Jose. When a patient from Mumbai recently came on service, Indira volunteered to connect with the family, and now makes regular visits to the patient’s home.

“When I first started visiting with the patient, he was extremely depressed,” comments Indira. “He was terribly homesick, and ALL he wanted was to go back to India.”

In addition to the patient’s doctor advising him not to travel, there were family dynamics adding to the patient’s heartache. Talking about India seemed to make the patient sad, so his family decided that it was best not to talk about India at all in the home. Thinking that they were helping him, family members distracted him when he reminisced. Ultimately, the patient felt shut down and became even more depressed.

So Indira came up with a plan. She started cooking.

She brought traditional home-cooked Indian foods over to the patient, so he could revel in the tastes and fragrances of the familiar spices. Then she began playing music, using her skills as a classically-trained opera singer. Indira sang songs for the patient in his native language. Seasons music therapist Josephine soon began joining them for Bollywood music “jams” in the patient’s living room.

“It’s made a real difference for him,” says Indira. He’s still homesick, and nothing’s going to change that. “But every time I visit, I bring a little of Mumbai with me, and it takes him back there.” Supporting patients so they can find that place of love and safety is one of the many strengths of our culturally competent volunteers.

If you’re interested in volunteering in any of the 19 states in which we serve, please click here to learn more about our volunteering opportunities and to submit your application.