A Man of Honor

By Seasons | February 28, 2017
Most 17-year-old boys are focused on girls, sports, and getting into trouble with friends. Those days ended for Donald Reese when he was drafted into the Army in 1945. Gone were the days of learning the periodic table in chemistry class or listening to the latest Bing Crosby hit with his friends at the local diner—suddenly Donald was thrust into combat halfway around the world.

While his friends were being handed their diplomas from high school, Donald was fighting in the Battle of the Bulge, the largest and bloodiest battle the United States fought in World War II. In that battle alone there were over 89,000 casualties, but Donald survived. After spending three years in the Army, he returned home. Upon his return, he was awarded 2 bronze battle stars, a World War II Victory Ribbon, and 2 Presidential Unit Citations.

Donald came home a different person. He wasn’t a naïve 17-year-old anymore, but rather a man who had to quickly grow up by himself, miles away from the familiar aspects of home. Donald valued his education and the first thing he did once he was back home was to sign up for his Senior year of high school. At that time, things were different and Donald actually had to go back to school to graduate. There was no GED for him to complete on his own, or online courses he could take. It was back to chemistry class and school dances as if the past 3 years hadn’t happened. Donald graduated high school with the Class of 1947.

Donald went on to marry, and he and his wife Bertha and had two sons, Barry and Jason. In January of 2017, Donald was admitted to Seasons Hospice & Palliative Care with Congestive Heart Failure. Once our Seasons New Jersey team found out that Donald was a veteran, they wanted to honor his service in some of the fiercest battles of the second world war with a We Honor Veterans pinning ceremony. Donald’s social worker, Brittany Desch, and Donald’s neighbors reached out to the American Legion, the local Masons, and Mayor Gerard Tamburro of the Township of Monroe; they all agreed to attend the ceremony to honor this special man.

The pinning ceremony was held at the Monmouth Crossing Assisted Living, with Donald  surrounded by his family, including his sons Jason and Barry who travelled all the way from Arizona for the event. Bertha, who was also a resident at the assisted living facility, usually couldn’t be convinced to leave her room. Once she heard about the pinning ceremony, she knew this was an event she could not miss for her husband.  Mayor Tamburro presented Donald with a certificate that honored his military service in World War II. Two members of the Masons were in attendance to honor his 50 years of service with their organization. The American Legion presented Donald with a certificate of recognition for his public service. During the ceremony, the “Army Goes Rolling Along” and “God Bless America” were played in the background by Seasons music therapist Steven Nieves.

As the event concluded, the Seasons team presented Donald with his We Honor Veterans certificate. Bertha timidly stood by Donald’s side and had the honor of pinning him with an American flag pin, as their sons looked on with pride glistening in their eyes. 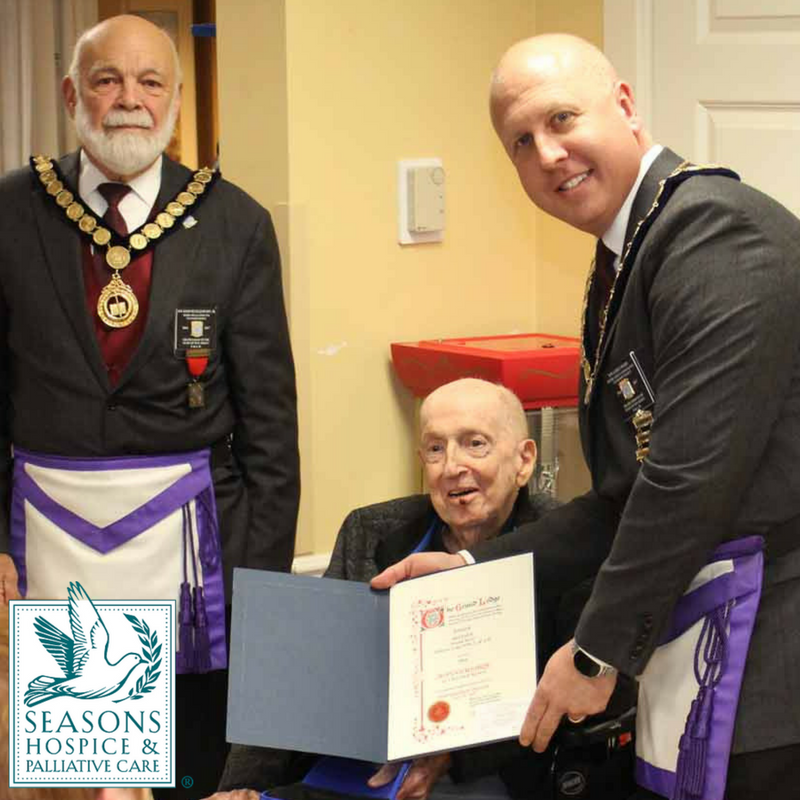 Community, Veterans, Patient Stories
Making Hospice Friends from Across the World! Thoughtful Gifts for the Bereaved