Dressing for the Journey 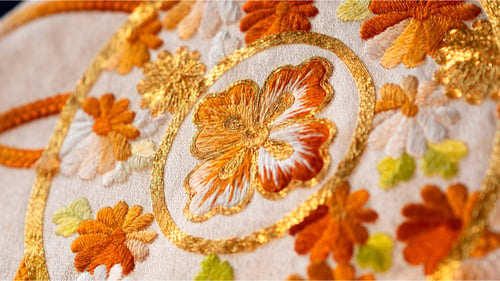 Reflections of a hospice nurse on the moments that matter most.

As a hospice nurse I spend my days with people who are in the midst of contemplating their own deaths, or the death of someone they love. The journey to the end of our physical life is a sacred one. I am honored by every person I am able to join, however briefly, on their path to the end of their life. I was recently blessed with an opportunity to serve a woman who knew exactly what she wanted at the end of her life, and how she wanted it done. I was deeply moved by my chance to play a small part in her story.

Sachiko was a lovely Japanese patient I met one evening at the end of a rather hectic day. On our first visit, she was in her bed with her son and daughter-in-law at her side. She was petite, quiet, and had an air of peace about her that filled the space. My first visit was focused on making sure there were no unanswered questions or unmet needs for her medicine or supplies.

Our later visits allowed for more time to get to know Sachiko. On one visit, I had the opportunity to listen to Sachiko explain her experience of Buddhism. It was clear that she had arrived at a place in her life of serene acceptance, calmly facing what lay ahead for her. It was inspiring.

The power of the keepsakes we hold

During one of our visits, Sachiko's family asked her to share a photo with me. It was a black and white picture of Sachiko, taken when she was a young woman living inJapan. In it, she wore a kimono. Sachiko and her family explained to me that the kimono was made by her mother. However, "made by" doesn't quite do it justice. The silk was harvested from worms her mother raised, and she spun it into thread and wove it into fabric before having it dyed. Her mother sewed the fabric into the breathtaking kimono I saw in the picture.

It was an amazing story, even if it had ended there. But then the family continued. Sachiko still had the kimono, and she intended to be dressed in it on her death and wanted to be cremated in it. They took me into the bedroom where it was spread out on the bed. It was beautiful. Sachiko laughed as she showed me the silk undergarments she would have on under the kimono. I wondered if I would be there on the day she put the kimono on for the last time. It turned out that I would.

Dressing for the journey

Time passed, and the rhythm of seeing patients continued for me. A few weeks after seeing Sachiko smile over her kimono, I received the call from the office that we frequently hear. Sachiko's son had called to say his mother had passed. I got in the car and made my way there as quickly as I could.

Entering a home where a death has occurred is similar to walking into a church. There is an air of sanctity about it. It is an intimate moment where families and loved ones are their most vulnerable. I am always honored and humbled to be present in these private and sacred moments.

Part of my role as the nurse pronouncing death is to contact the funeral home who will be caring for the deceased. As we talked about the plan for Sachiko, it became obvious that no one would see her after she left her home. She was to be cremated, and due to COVID-19, there would not be a visitation. The family had accepted this and were at peace with it, though somewhat saddened. Seeing this, I brought up the kimono, asking if they would like me to dress her before she left. Although the funeral home would certainly have done this, it would have been unwitnessed by anyone who knew or loved her. They granted me the honor of providing this service.

My time with Sachiko, bathing her and dressing her in the kimono her mother made, was one of the most beautiful experiences of my life. Death can be messy and painful and frightening, but it is also beautiful and sacred. I sang to Sachiko as I cared for the body that she would no longer be using.

Along with the serious and sacred, there can also be moments of humor in death. I laughed at myself, and talked to Sachiko as I dressed her, since I had never handled a kimono and was not entirely sure how it went on. Although she could no longer answer me, I sensed that she was looking on and was satisfied with my efforts.

When it was done, I invited her son and daughter-in-law into the room. Her son gathered a few of her precious orchids and placed them in her hands on her chest. Her daughter-in-law read a Buddhist poem. We gathered around her bed and prayed together, acknowledging the amazing woman she was, and wishing her well on her journey into the next life. It was a moment that will live in my memory always.

When people ask, "Why do you work in Hospice?" it is for moments like these. I am so blessed to have been a small part of her journey. Thank you, Sachiko. I can't be certain exactly what awaited you at the end of your journey. But I know you were beautiful when you got there.

The benefit of holistic care at the end of life

Hospice allows these sacred moments to happen- it’s one of the few parts of the healthcare continuum where medical professionals are allowed to support not only the physical needs of the patients, but also the spiritual and psychosocial needs. It allows communities to care for the total humanity of those they love and revere.

Wendy Sharp is an RN Case Manager for Seasons Hospice & Palliative Care in Pasco County Florida. Sachiko’s family allowed us to share this reflection on the care she received.

Community, Patient Stories, Psychosocial Support
Better Care for Your Heart Failure Patients The Patient is Dying But There Are Emotional Barriers to Hospice