Once the music started and Sonia began to walk down the aisle, all the flurry and chaos of getting things ready in time on that Monday morning faded away, and all that was left was the lilting sound of Anita Baker’s “Giving You the Best That I Got” and the look on Michael’s face as Sonia approached her groom.

This wedding wasn’t years in the making; in fact, it had only been three days since Michael popped the question.

Although the couple had been together for more than twenty years, there was an urgency in the question and the timing of this all—Michael was dying from lung cancer, and he only had a little time left.

Michael had been in the hospital for a few weeks as he declined, and Sonia, his “Renia,” was at his side all day, every day, even sleeping in the hospital at night. When our hospice care consultant Althea was called in to talk to the couple, they made the decision to come on hospice care because they wanted Michael to live out the rest of his days exactly how he wanted to. As they talked about how Sonia would have power of attorney and be in charge of affairs after Michael died, Althea could tell Michael had something on his mind.

Then he came out with it: “Why can’t I marry you, Sonia? I want to marry you.”

Sonia was taken aback at first; they’d been together for twenty years, and they had always agreed that they didn’t need to get married to prove their commitment to and love for each other. At this point, she was just trying to make sure everything was in order, so at first she brushed off Michael’s comment. A wedding seemed unnecessary, and right now she wanted to just think about his care.

“But this is part of my care,” Michael said. “You’ve been with me this long, you might as well go all the way with me.”

After that, it was all hands on deck! At first they decided they would try to get married the very next day, on Friday, but when it turned out it would a little more time to get the marriage license, they decided that Monday would be the day – and even this didn’t give them much time! Our social worker Paige took lead on finding information about getting the license, Althea helped Sonia with all the necessary paperwork, and over the weekend, everyone was brainstorming ideas to make the wedding more special. In fact, Althea got emails during the weekend from the nurses who were caring for Michael; he wouldn’t stop talking about how excited he was to get married, and they wanted to make sure that he wouldn’t be disappointed!

When Monday morning came, while Sonia went to get the marriage license, our team got busy decorating the family room at the unit with decorations Althea had found at her house. With the assistance of the Seasons Hospice Foundation, one of our staff members procured a decorated cake and a bouquet for Sonia to carry, and everyone was told to wear Lions gear because the couple were big fans. When there was a last minute mix-up about timing with the chaplain who was supposed to preside over the wedding, chaplain Portia at the Detroit Medical Center hospital stepped in, with just twenty minutes notice. Despite the last-minute nature of the wedding, Sonia and Michael’s family and friends were there to support them, filling up the room and gathering close.

Michael was the perfect groom, visiting with his guests 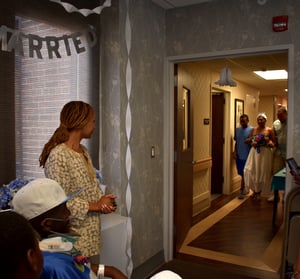 while the rest of the wedding party assembled. Sonia had been so occupied with making sure she had everything ready that she hadn’t had time to get a special dress, but one of her family members quickly offered to switch dresses with her, and before she knew it, she was in the perfect white outfit, complete with glitzy tiara and veil. Her bouquet was divided so that there were flowers for the bridesmaids and flower girl, and soon it was time for her to take the arms of her son and grandson and start walking down the hall of the hospice unit to where Michael waited in the family room.

When Sonia reached Michael’s side at last, time stood still for a little bit, finally, as they listened to Anita Baker’s classic words:

My weary mind is rested
And I feel as if my home is in your arms
Fears are all gone, I like the sound of your song
And I think I want to sing it forever

Forever. That’s what Sonia and Michael promised each other.

After the ceremony finished, everyone stuck around to eat cake and celebrate the couple. There were tears, laughter, love and memories shared. It was the perfect chance to celebrate a lifetime of love and commitment, and to hold family and friends close.

Michael passed away the next day, on Tuesday. “This isn’t just any Monday,” Chaplain Portia had said the day before. “This is Miracle Monday.” And it was true – the knowledge and the memory of the love that Sonia and Michael had reaffirmed to each other on that Monday, and the love and support that surrounded them that day, will be with the family forever.