“Joan Is About Life”

Joan has always been a free spirit. After growing up in Michigan, she found her home in California where she lived with her husband, and loved to swim, climb mountains, and be outdoors as much as possible—that is, when she wasn’t pursuing her other hobby, art.

Joan is almost 90, and lives in an assisted living facility in Florida. Though she is battling late stage breast cancer, Joan is determined to keep living her life her way, and that includes walking more than a mile to Target at least once a week. One of the last times she went, she told us she went shopping in the bikini section!

When Joan came on our service several months back, she requested that a chaplain visit her. When Chaplain Kevin first visited Joan, he noticed that despite her fierce and independent spirit, something seemed to be troubling her. Kevin found out that after her husbands’ death several years back, Joan started living a life alone. She doesn’t have any family nearby. She told Kevin about her life in California, her family relationships, her love for her art, and her time spent as a dental assistant. She had never been a touchy-feely person, but she really began to open up to Kevin, and told him that some of the things she was sharing with him were things she had never told anyone before.

Among the many things she shared, Kevin learned that while faith used to be an important part of Joan’s life, it hadn’t been for a long time. Life had gotten busy and so much had happened.

Kevin sensed that Joan was going

through some spiritual distress, and, upon her request, came to visit her as often as he could. They talked about many different things, but nothing seemed to fill the inner longing that she had. One day as they were talking about nature, Joan said out-of-the-blue, “Can you baptize me?” When Kevin gladly offered to do so, Joan revealed that she already had selected the date that she wanted it to happen.

Just a week later, Joan, Kevin, and our music therapist Mary Catherine met in a small alcove lounge in the assisted living facility. While it wasn’t intended to be a chapel, something about the shape of the room made it look like an intimate sanctuary. They used a piano bench as an altar, and while Kevin knelt behind the bench, Joan sat on a chair in front of it. The ceremony was simple but moving, and while she was baptized, Joan began to weep with joy. Once Joan was baptized, Kevin presented her with a framed official Certificate of Baptism, printed with her name and completed with his signature, and a small Bible.

Since her baptism, Joan has been transformed. Her free spirit and love for life are as strong as ever, but in addition to this, there’s a joy and peace that emanates from her inner being. Kevin no longer needs to visit as often, because she no longer has that inward feeling of emptiness. Her weekly walks to Target, her insistence on having things done (or not done!) her own way, and her love for the world and for life are now supported by an inner peace and joy. 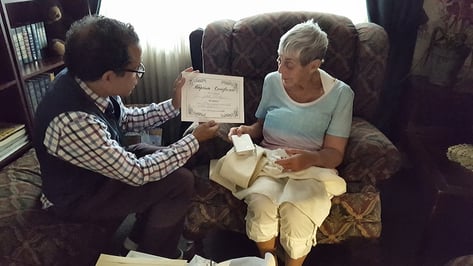 As Kevin said, “Joan is about life. She’s not about waiting to die. She’s about living until she can’t live anymore.”