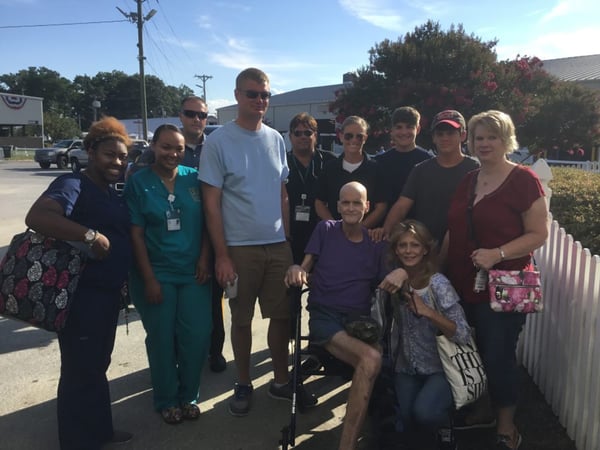 The Rodney Caulk that our staff knows has always been a man of the Earth, finding his utmost happiness in the simplest things in life. A livestock farmer, Rodney spent all of his 54 years focused on his farm, his family and his faith in God.

He was the primary breadwinner and took much pride in his work, knowing what a blessing it was to be able to support his family that he loved so much. His sons, 16 and 13 years old, were already following in his footsteps, knowing that they too would someday take over their father’s farm.

When Rodney was diagnosed with metastatic esophageal cancer, it knocked him to his knees.

Hardworking, humble, silently strong in the midst of chaos. His family told us those admirable qualities that Rodney learned in years of working the land always provided reassurance to them, even when they were facing the biggest hurdles. No problem was too big for the Caulk family, not with a leader like Rodney at the helm. 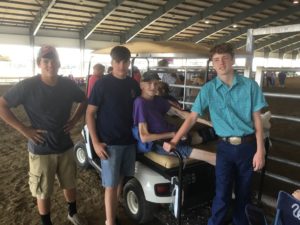 But not this time.

Rodney and his family knew the prognosis was not good. Instead of opting for aggressive treatments with little chance of success, Rodney made a decision for his family. He decided to sign onto care with Seasons Hospice, knowing that with help from our staff, he’d be able to live out the rest of his days at home, pain-free, and with his family.

He did that hoping we would be able to help him fulfill his dying wish: to visit the Delaware State Fair one last time.

You see, going to the fair was tradition for the Caulk family; every year Rodney and his wife and sons would pack up and camp on the fairgrounds, bringing their prized chickens, cows and goats to show.

This year was a big year. Rodney’s 16 year old son was showing their prized beef cow. Rodney told our staff he couldn’t imagine not being there for his son.

Of course, our Delaware staff knew some way, somehow we were going to make this happen—and quickly. Rodney was so proud of his son; we couldn’t let him miss out on this opportunity. 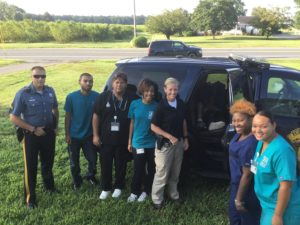 It took nearly our entire team to make this happen but it came together beautifully. Our team was so touched, two staff members even volunteered their time to make the trip with the Caulk family. From prepping Rodney the night before to driving with him across the state, Rodney was surrounded not only by his family, but his Seasons family as well.

Making it even more special, our Team Director Donna worked tirelessly to get the Delaware State police to coordinate an unmarked police car to pick Rodney up and drive him to and from the fair. The State Police went above and beyond the call of duty, even coordinating to drive Rodney right up to the arena and allowed multiple officers to stay with him during the event. They even provided free tickets into the fair for Rodney, his family, and all of our staff members.

Rodney enjoyed the “best day of his life,” snacking on hot dogs, cotton candy and soda. He watched his son proudly from the stands, as their cow took second place and advanced to the finals! He visited with all of his extended family, laughing, joking and reminiscing about all the amazing memories they had shared together. Exhausted from the day, our staff tucked Rodney into his recliner and made sure that he was completely comfortable.

Rodney became extremely emotional when arriving back home. He was so thankful for all we had done, and just kept saying, “I can die now. I know my family will be okay.” Mr. Caulk passed away peacefully at home, with his whole family at his side on July 29.

Rodney, like so many of our patients, has certainly touched our lives forever. His story inspires us all to live every moment as if it was our last. We are truly thankful to have been in his presence. A massive thank you to all of our Seasons staff members who participated in this case! A special acknowledgement of the Delaware State Police Troop 2, particularly Corporal Nash. Without them, this would have never been possible.

“The best way to find yourself, is to lose yourself in the service of others”- Mahatma Gandhi

Community, Patient Stories
The Dream of a Lifetime: A Visit to the Grand Canyon Spiritual Presence Volunteers Nourish Patients’ Souls