America’s National Parks system is one of the true jewels of the United States. Often referred to as ‘America’s best idea’, the system established by President Woodrow Wilson has captivated and enthralled visitors for over 100 years. This sentiment is especially espoused by Dee, a patient we are honored to be able to care for in San Jose, California.

To say that Dee is a National Parks enthusiast might be a bit of an understatement- she has been to Yosemite over fifty times, and when she dies, she has asked for her ashes to be scattered in the placid valleys in between the towering cliffs for which the park is famed.

If you’ve never seen or visited Yosemite, this might seem a bit extreme. However, this park is home to some of the most magnificent vistas in the United States, many made famous by photographer Ansel Adams. Dee loves talking about the parks to her Social Worker Alex- regaling her with stories of camping at Yosemite with her family, sometimes for over a month.

When Dee’s cancer diagnosis began advancing, she wistfully recalled those times spent roughing it in Yosemite’s steep canyons and wide, glacier-carved meadows. In passing, she told Alex that she wished she could go back there one last time with her family.

A wish like that is a wish worth granting. While Dee’s cancer was progressing, with some proper planning and support, there was no reason why Dee couldn’t bask in the shade of Half Dome one last time! Alex quickly contacted the Seasons Foundation who readily agreed to pay for lodging near Yosemite for the night. Other pieces quickly fell into place. Seasons reached out to a hospice program near the park to be on alert in case Dee needed symptom control during her trip. Dee’s hospice nurse Breda outfitted Dee and her family with a pain management pack, and all the right phone numbers to call if they needed help. Breda took the extra time to educate the family on things to be aware of so Dee could be as comfortable as possible on the trip.

With that, on a balmy Northern California morning earlier this June, Dee, her son, daughter, and grandson packed up the car and headed east from San Jose into the Sierra Nevadas. A little over 4 hours later, they were greeted by the sweeping valley vistas for which Yosemite is so famous. Even though she had been there many times, all Dee could muster was a quiet “marvelous” at the sight. 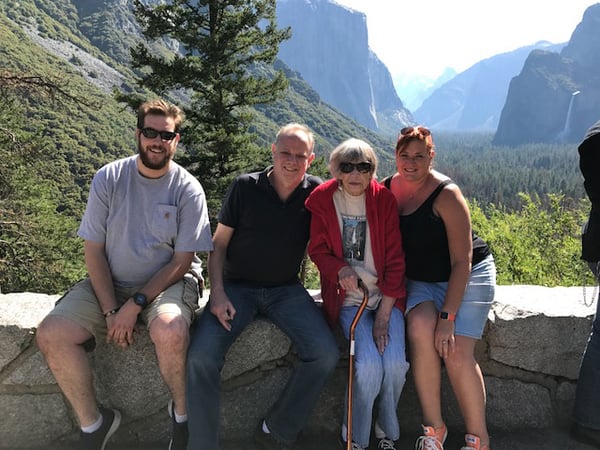 The family stayed at the hotel that night without incident and got Dee safely back home the next day. When Alex was able to connect with Dee a few days later (who, despite cancer maintains a very active social life- she can be a little hard to get a hold of!), she was regaled with details from the trip. Dee was beyond thankful for the experience the foundation was able to help provide. “You guys filled a spot in me that couldn’t be filled any other way”.

We are thankful and honored to be able to provide meaningful experiences that add quality to the lives of our patients every day. For Alex and the San Jose team, arranging Dee’s trip was business as usual, especially to a jewel like Yosemite.

Community, Patient Stories
The Wedding of Jamie and Laurie A Tribute to Laure Gutman