The Wedding of Jamie and Laurie

As Jamie watched Laurie enter the room in her white lace and satin dress, holding a bouquet of red and white roses, tears of astonishment and love came to his eyes.

This cold January day was the culmination of everything he had been waiting for for sixteen years—the moment he finally married the love of his life. Despite being surrounded by medical equipment in their home, and despite the nurse standing by to make sure he was comfortable, it was still the fairy tale wedding that Jamie and Laurie had been dreaming of for years.

Jamie and Laurie first met back in 2001, but it wasn’t until 2014 that they became more than just friends. As their relationship progressed, the couple started making plans to build a life together.  One day, after the couple had moved in together, they were dancing around their living room after dinner to some of their favorite country music, when all of a sudden, Jamie popped the big question. As they slowly danced together, Jamie asked Laurie, “Can I have this dance for the rest of my life? I want you to be my wife. Will you marry me?” Her heart welling with joy and excitement, Laurie couldn’t wait to say yes!

The couple started happily planning their wedding together, but while they were in the midst of it, they learned something which brought everything to a halt—Jamie had a brain tumor. In the weeks before the surgery that would bring answers, the couple was plagued with uncertainty: what did this mean for their future together? How would they find the strength to get through this?

After an emergency surgery in October, Jamie was officially diagnosed with Glioblastoma, a severe form of cancer. Through all the obstacles and doctors’ appointments and treatments, Jamie and Laurie stayed strong and committed to each other, and their love gave them the strength to carry on. The couple considered themselves married ever since Laurie accepted Jamie’s proposal, and he even introduced her to people as his wife, but it was still important to the couple to have an actual wedding ceremony. While they continued their wedding plans, unfortunately Jamie’s nausea and headaches forced them to postpone the ceremony two more times.

In December of 2016, planning for a wedding became even more urgent. Jamie and Laurie learned that his cancer had become more aggressive and he had only a few weeks left to live.

That was when Jamie became a patient with Seasons to ensure that he would be comfortable during his last days. As his cancer advanced, there was one thing he couldn’t get out of his head – his final wish, his beautiful bride walking towards him in a white dress, in his own home, surrounded by the children he loved. We wanted to honor Jamie’s wishes, and made the arrangements for him to go home from our inpatient center for one day so that his last wish could be fulfilled.

On the day of the wedding, Jamie’s audible gasp upon seeing his bride as she entered to “Amazing Grace” made everyone in the room cry. Jamie and Laurie sat close together while their pastor spoke on the beauty and endurance of love, and they lit a unity candle together, something they had long dreamed of. The room was full of family from both sides, including Jamie’s brother and sons, and loved ones. Seasons Music Therapist Quenton provided the live music, and Seasons nurse Malisa was also there to make sure Jamie had everything he needed—in just the few short weeks that Jamie had been on our service, she had already become good friends with the couple. Laurie shared later that having Malisa there watching over Jamie had helped her remain at peace throughout the day.

At the end of the ceremony as the couple were presented as husband and wife, Jamie was able to stand up to kiss his beautiful bride, strengthened with joy because the moment he had long been dreaming of had finally happened. Because of the last-minute nature of the wedding, Quenton had sat down with Laurie right before the ceremony began to choose the music. When the ceremony was over, he played Laurie’s choice: Frank Sinatra’s “Fly Me To the Moon.”

Jamie passed away just two weeks after the ceremony. He was able to live in peace the rest of his days, knowing that what he had long wished for had become a reality. As Laurie looks back on this now, her sorrow in Jamie’s loss is tempered by the joy she feels when she thinks about Jamie’s legacy and how he was able to live out the remainder of his days in the way that he wished. 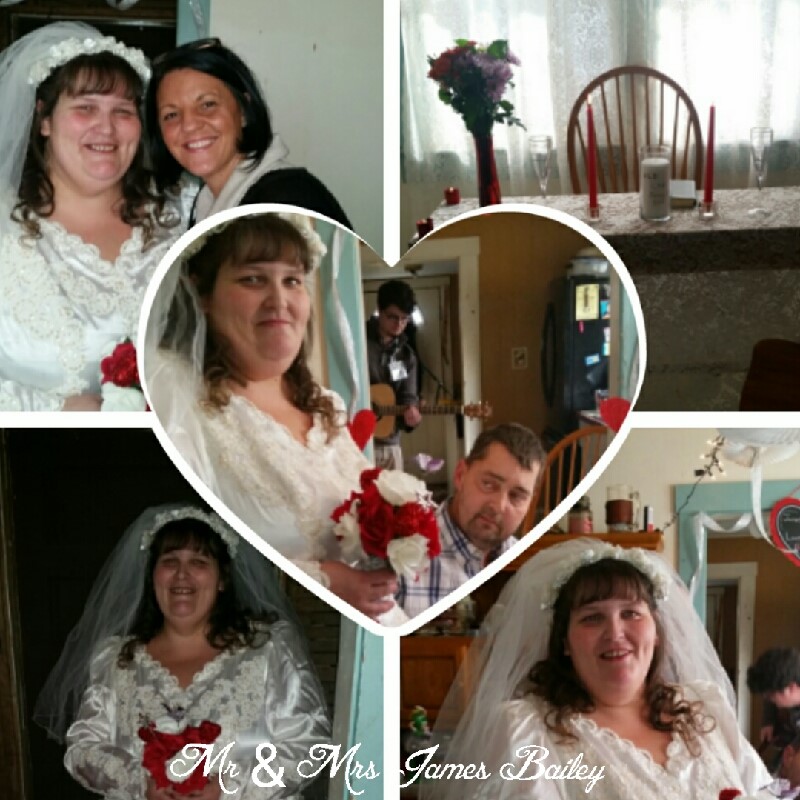