Serotonin Syndrome? Is that really a thing? 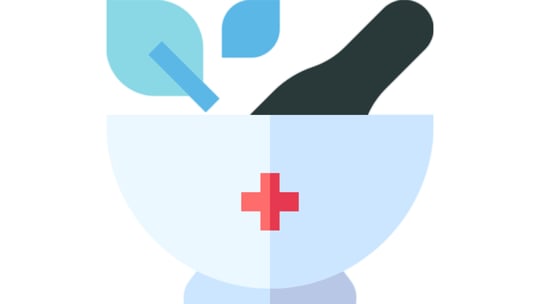 She also has a past medical history of type 2 diabetes mellitus, severe depression, and hypertension. On admission she tells you she has difficulty sleeping, both getting to sleep, and staying asleep. Her medications on hospice admission include:

Because she finds the insomnia burdensome (as does her caregiver husband), you get an order to begin trazodone 25 mg PO at bedtime, and increase it to 50 mg PO at bedtime two days later. She tells you she is sleeping better, but after several days she begins to complain of nausea. Her bowel movements are normal. Several days later, her husband tells you he thought she was acting confused, and on physical examination you find she has a fever of 102°F, and a heart rate of 100 bpm. You also notice tremors of both arms and hands.

What could be causing this constellation of findings in this patient?

If you chose C, you are the blue prize winner. Of course, Clint Eastwood would have picked E. As he said, “A man has to know his limits!”

Serotonin syndrome is caused by hyperstimulation of the central and peripheral nervous system by – what else? – serotonin!

Any medication that increases serotonin levels can cause serotonin syndrome, but patients who take two or more medications with this mechanism of action are particularly at risk.

This adverse drug effect may not be recognized by practitioners because the signs and symptoms range from mild to severe and life-threatening. Early symptoms include gastrointestinal complaints which may be thought to be due to a viral or flu-like illness. Serotonin syndrome manifests with a class triad of clinical features that include:

Serotonin syndrome is a clinical diagnosis, and is associated with the introduction of, dose increase, or introduction of a second (or third) sertonergic drug. It’s important to get a good medication history from the patient/family including illicit drug use and herbal medications (e.g., St. John’s wort, ginseng, tryptophan). Practitioners often overlook drugs such as tramadol, fentanyl, and linezolid as causes of serotonin syndrome.

In the case of Mrs. Johnson, when she was admitted to hospice she was already receiving citalopram (an SSRI), and venlafaxine (an SNRI), both of which are serotonergic agents. The addition of trazodone was the straw that broke the camel’s back, also being serotonergic. Treatment involves removing the offending agent(s) (at least the trazodone in this case, preferably one of the SNRIs also), and supportive, symptomatic care.